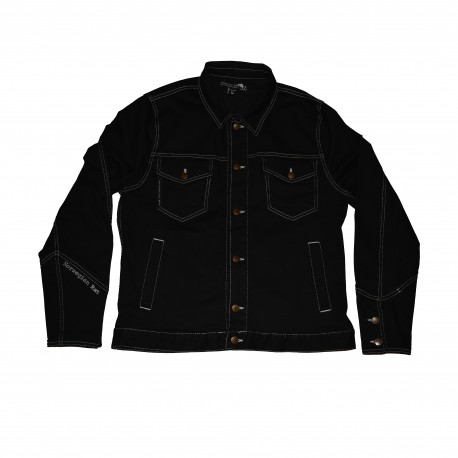 A lighter jacket made of 95% cotton and 5% elastane and with off-white seams. This jacket is a little stretchy, which makes it a very comfy piece of clothing. Custom rat buttons and zippers. This jacket is equipped with 8 pockets. Named after Naglfar in norse mythology. Jannicke Wiese-Hansen of Nidhogg Tattoo Studio (located in Bergen, Norway) did the artwork that is located on the inside.

Naglfar (nail ship) is in Norse mythology a huge vessel that is foretold to sail to Vígríðr, ferrying hordes of chaos that will do battle with the Æsir and Ásynjur.

The ship, owned by the jötunn Muspell, is told to be the biggest of all ships, and is built of the nails from dead men. This meant that it was considered vital to keep your nails short and trimmed, lest you wanted to end up providing material to this terrifying ship.

During Ragnarök, when the gates of evil opens and all chains and locks bursts, Naglfar will break free from its moorings and set sail from the domains of Hel. Captained by the jötunn Hrym and Loki, Naglfar will be carried along with the surging waters of the flood, caused by the rage from the Midgard Serpent Jörmungandr.

You can read more about Naglfar on Wikipedia.

From the east comes Hrym | with shield held high;
In giant-wrath | does the serpent writhe;
O'er the waves he twists, | and the tawny eagle
Gnaws corpses screaming; | Naglfar is loose.

O'er the sea from the north | there sails a ship
With the people of Hel, | at the helm stands Loki;
After the wolf | do wild men follow,
And with them the brother | of Byleist goes.

Surt fares from the south | with the scourge of branches,
The sun of the battle-gods | shone from his sword;
The crags are sundered, | the giant-women sink,
The dead throng Hel-way, | and heaven is cloven.