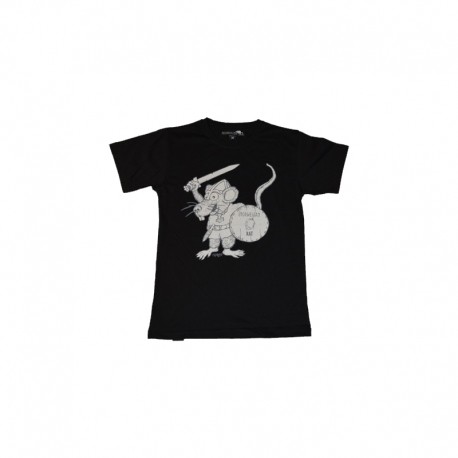 Black t-shirt with print on chest. Info text about the "Einherjar" on the inside.

Einherjar (singular: einheri “those who fight alone”) are men who have fallen in battle since the beginning of the world, and now are the chosen warriors of Odin. Vikings who gave up their lives on the battlefield were taken to Valhalla by the Valkyries, battle-maidens whose name meant “Choosers of the slain”. The einherjar had a part to play in the cosmic scheme, for they made up the ranks of human heroes who would fight alongside the gods in the final showdown of Ragnarok. In the meantime they were expected to keep in training by spending their days fighting one another. It was considered an honor to die fighting and ending up among the einherjar in Asgard, rather than die by age or disease. The figure of speech "to guest Odin in Valhalla" was used as a metaphor for dying in battle

“The mighty einherjar of Odin’s halls,
Slash each other every day.
They choose who shall die and leave the battle,
Later reconciled they will sit."