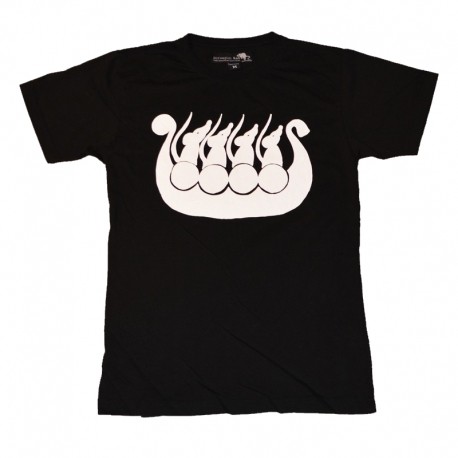 Black t-shirt with print on chest. Info text about the boat type "Knarr" on the inside.

NB: These shirts may be a little tighter than others brands, especially the larger sizes. Go for the largest of your options if in doubt!

Knarren (Knorr) was the most common and the most important type of ship during the Viking era. Designed to carry large loads, rather than carrying warriors, the hull was broader, deeper and shorter compared to their longships, and thus could be maneuvered with less crew. It was a very robust ship, built to withstand the crossing in one of the world's harshest seas between Iceland and Greenland. The Knarr had oars, but it was almost exclusively built for sailing. Although this vessel was primarily built to carry cargo and sail the open seas, it is very likely they were used as warships as well when needed. The story of the Battle of Hafrsfjord which probably took place in 872, mention trading vessels from the east with carved bows. These ships were most likely Knarrs. Like other ships in the Viking era they were clinker-built.

The Klaastad ship is referred to as the fourth Viking ship of Norway, the others being the famous longships Oseberg and Gokstad, and the karveship Tune. The Klaastad ship is a Knarr, and is probably from somewhere around 900 AD. This ship differs in many ways from the more famous Viking ships mentioned above, it being discovered and recovered on land which had formerly been seabed, while the other three ships were grave goods.

You can read more about the Knarr on Wikipedia.