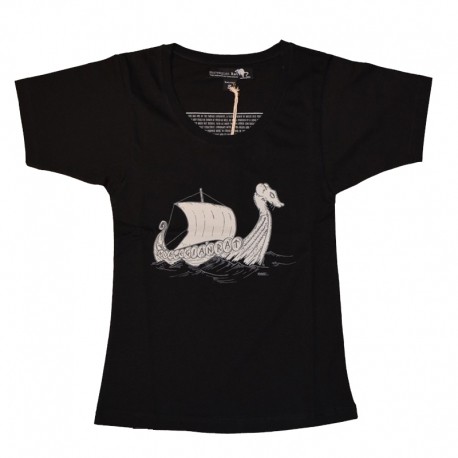 Black t-shirt with print on chest. Info text about "The Dreki" on the inside.

The Dreki (dragon) was one of the famous longships, a sleek warship of which sole purpose was to carry men into battle. This ship could be rowed at speed as well as being powered by a large square sail. The mast could be unshipped easily when not needed, such as when passing under low bridges or when the Vikings wished to approach their target stealthily. Longboats with gaping heads and yawning jaws were meant to look as fearsome as possible; their purpose were to strike terror in the hearts of enemies. Some believe they also could serve as a protector of the boat and its passengers, scaring away sea monsters and wraiths whilst at sea. When approaching land, the head often could be removed to prevent scaring off the friendly land spirits. While all types of longships could theoretically be converted into a dragon ship by replacing the bow ornaments with an animal head, the majority of the longships did not have such a decoration. Usually a boat with a head piece were the biggest in the fleet, and thus belonged to the King or Earl himself.

The longships were the ultimate technological achievement of the Viking era, giving the Scandinavian mariners almost undisputed mastery of the seas.

You can read more about the Dreki / Longships on Wikipedia.